Where oh where have you been?

Another two months have passed and I have not posted to this blog.  I have no excuse (unless raising two small great-grandchildren is an excuse) and hope to get back into posting articles on a regular basis.

I've found another interesting book (while waiting for my great-granddaughter participating in a dance clinic) in the library in Meridian.  We did not have it in our Nampa library so I did an inter-library loan.  The book is a very pleasant 'Tales of the Trail" written by Arabella Fulton  'after she had passed her eightieth milestone -- an account, from a woman's viewpoint, of the crossing of the plains in ox caravan in 1864, and settlement of the Boise Valley of Idaho; a wagon trip to Texas, and settlement and life there; a wagon trip to Washington Territory from Texas, and settlement in the Kittitas Valley.'  This book is an easy read and gives a woman's account of the hardships of travels over the many miles from Missouri to the frontier settlements. 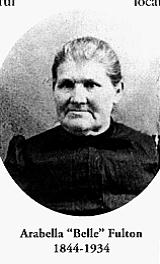 Arabella Fulton, Valley Pioneer, Succumbs Today. Mrs. Arabella Clemens Fulton passed away July 30 1934 at 3:45 a.m. at the home of her daughter and son-in-law, Mr. and Mrs. Will German.

In Texas the following four children were born: Frank, Mrs. Nellie Wilmarth, Nettie, and William R. In 1883 they moved to Washington Territory by wagons. They spent the winter in the Wenas, moving later to Ellensburg in the spring of 1884. Two daughters, Mrs. Estella Cooper and Mrs. Jacquelyn Nickell were born here. Mr. Fulton died here in 1896. After that, Grandma Fulton resided in Okanogan County and California. She moved back here five years ago and has since made her home with her daughter and son-in-law, Mr. and Mrs. William German. The seven living children are J. L. Fulton of Willows, Calif.; Mrs. Della German, Ellensburg; Francis M. Fulton, Wenatchee; Mrs. Nellie Wilmarth, Nampa, Idaho; William F. Fulton, Mazama, Wash.; Mrs. Estella Cooper, Glenn, Calif.; and Mrs. Jacqueline Nickell of Pateros, Wash. There are 28 grandchildren and 23 great grandchildren.

Grandma Fulton was a faithful member of the Christian Church for many years and until her death. She leaves a host of friends who will mourn her passing. Funeral services will be held at Honeycutt's Chapel on Wednesday afternoon at 2 o'clock. Burial in the IOOF Cemetery.

*************************
I have no relationship to Arabella Fulton that I can determine, but as my grandmother Mary Winnie Dexter, came from Illinois to Idaho territory with her parents and two siblings in the 1880s, I imagine they had some of the same struggles in settling in Long Valley.  Even though this was twenty years after the Fultons settled in Boise Valley, it was still difficult to get goods into the high mountain valleys and household goods were scarce and expensive.  Raising crops and animals was difficult with the unpredictable weather, medical help was almost non-existent, and life was hard for all. 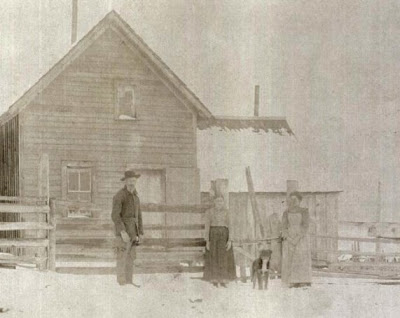 Mary W Dexter with her parents, on their homestead in Long Valley in the 1890s.

By the time my grandfather (her future husband Thomas Logue) had arrived in Long Valley, Mary Dexter and her father, Walter M Dexter had filed on homesteads of 160 acres each.
Posted by Reba Mc at 5:53 PM 1 comment:

Checking in and Checking Up 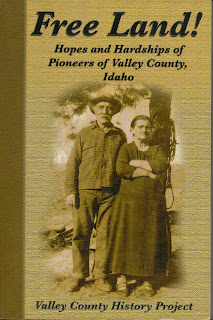 The book is full of nice pictures, maps, and lots of information, but it is lacking information on my Dexter forefathers who were early pioneers of Valley County and the information they have on the Logue's (also early settlers) is grossly wrong.  I'm not sure who supplied them with the information but they sure got it wrong.

First, see my posting of March 21, 2012, for information on the Dexters and their journey to Idaho's Long Valley.  I used this information to file for a pioneer certificate from the Idaho Genealogical Society.

As for the Logues (also early settlers), in the tables starting on page 240 (Valley County Genealogy, compiled and edited by Eileen Duarte), they list George A. Logue as follows:
GEORGE A. LOGUE came to Long Valley in 1901 and met his wife SARA who came here with her family in 1889.  (WRONG - George A Logue (born 25 Dec 1840) married Sarah A Sweet, in Pennsylvania before 1869 and was father to Thomas E Logue, Johns S Logue, and Fred S Logue, all of whom moved to Idaho in 1901 - see Our Logue Family History by Wesley Craig on the Valley County Genweb page.  He lost his first wife, Sarah, in 1882 and remarried Aurilla Ervay, having a daughter Bessie with her, still in Pennsylvania.)  They homesteaded in Crawford. George's brother THOMAS ELBRIDGE LOGUE born 1870 married MARY WINNIE DEXTER of Crawford and ran the FS Logue & Bros Store in Thunder and died 1954.   (WRONG: Thomas E Logue was George's oldest son.  He did marry Mary Dexter - of the above mentioned Dexter family - but did not run the store in Thunder.  His two younger brothers, Fred and John were owners and operators of the store.  In checking out land records, a brother of George, Washington S Logue, also filed for a homestead in Valley County and is listed on the 1920 census living next to George's daugher Bessie and her husband, John P. Lampie.  Other Logues listed in the land records are Ezra Logue, a cousin, Thomas, John and Fred.)  George's son Merton was born in 1910 (George would have been 70 years old then) became a logger and later was Sheriff and died 1987.  Another son Cecil was born 1907 married Rachel Crawford 1933. George's son Walter was born 1909, married Vava Marguerite Jones 1902 and their daughter Leona born 1918.  (WRONG:  Cecil, Walter, Merton, and Leona were children of Thomas E and Mary Winne Logue.) 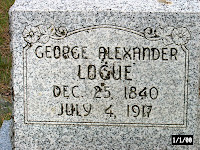 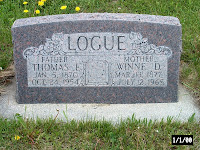 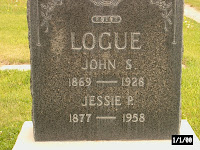 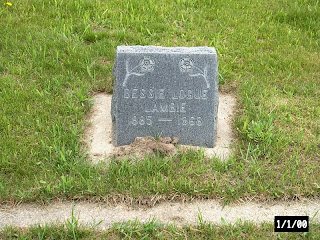 Why these errors surprise me is that the authors use a lot of information from Wes Craig (my cousin and grandson of George's daughter Bessie Logue) as sources for their Logue information and he is the author of the Logue Family History which proves that their data is incorrect.


One other small error noted: In the same table as above the authors list my uncle Joe Crawford (wife Mable) as brother to Otto W Crawford.  They are not brothers (his brothers were Will, Walt, Ernest and Cash) and I have not found any connection between these two Crawford families.


I apologize for neglecting my blog.  I invested in the 2012 Family Tree Maker because I thought it would be great to have software that would sync with my family tree on Ancestry.com - maybe save some time rather that have to enter the same data twice.  WRONG.  I've totally messed up my Family Tree Maker database and I've spend hundreds of hours trying to get it back to where I had it.  Doesn't leave much time to post to my blog.  I hope to be at a comfortable place with the database where I can take time to post regularly.

I can't believe it has been over two months since I posted anything on my blog - in my defense, it was the end of the term at work and as soon as I'd put in all my required hours and the kids' schools were out we loaded up some grandkids and took off to Disneyland.  Then I got back and started getting ready for another Crawford Family Reunion.


My granddaughter and I started scrapbooks on our Disney trip right away, so I haven't spent a lot of time on my genealogy research.  When I did, I made a mess of it.  I have Family Tree Maker 2012, which syncs with your Ancestry.com tree (that is if you set it up right).  Somehow, I got my trees (I have several) confused and now I am going to be months straightening it out.  My subscription to Ancestry expires in July, so I am trying to decide if it is worth keeping it up.

So I would really be interested in hearing from anyone who has experience with the FTM 2012 and how I can clear up this mess (one tree has doubled every member, so instead of 5000+ members, there are 10000+).

Well I think I'll work for a while on my Ancestry family tree and resume this tomorrow.
Posted by Reba Mc at 9:51 PM 1 comment: